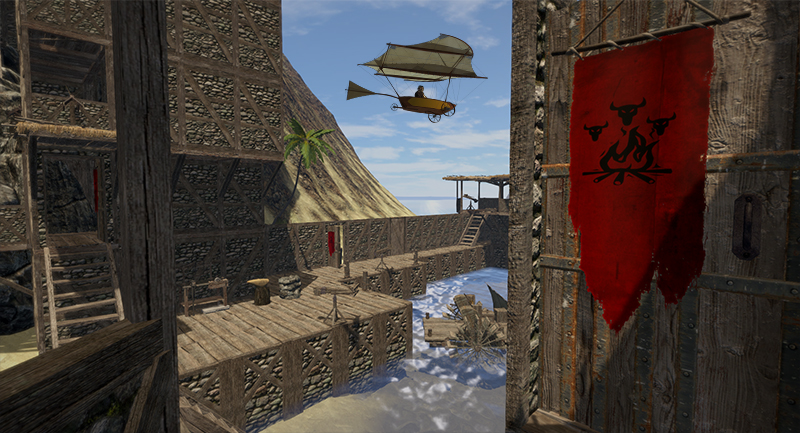 Hello guys,
just like the last time, also today we’ve reached more than 50 fixes so it’s a high time to sum up and show the progress achieved mainly thanks to your feedback (and a few sleepless nights that we don’t want to talk about:).

Finally new window for Builder’s Desk. Hope the buttons are now visible for everyone as well as the rules of protection system.
We want you to play together cause we feel like it’s the core feature of online gaming. That’s why we will continue to develop the co-op aspect of Out of Reach. Today we present you with clan banners:

From now on, clan masters can choose the banner in the main Builder’s desk and hang it on every door to establish stronger bonds between members:) There is also an option to see every clan member on your personal map, we’ve decided to sacrifice this part of survival for the sake of a better gameplay. Let us know what you think about it!

Another game changing feature. We are aware that some of you, even veterans of Out of Reach, always liked the bread eating contest during fights and treated it as a tactical aspect of the game. Nevertheless it wasn’t fully realistic and survival, and clever, and fair… We’ve been thinking about better system that could make players use their abilities, weapons and armour more than bags full of red-berries. Bandages is our another approach to this problem.

In other words: healing takes precious time and costs other type of resources. Eating slowly regenerates your health when the hunger bar is above 70%.

It’s a one little change of the way players hit that can bring a huge impact to tactical fighting. From the patch 0.9.13 you can choose from with side you will start swinging your axe or sword covering with your hit more space from your right, left or upper side. Should be very useful in close combat, tight, narrow corridors or ‘one vs many’ fights.:) Also here, let us know what would you improve!

First of all – we’ve finally managed to open 2 new servers in Australia, no more 600ms pings for you guys down there.:) In fact, even for Europeans the pings from Australia shouldn’t be greater than 400ms so it’s still playable and shows a decent quality of the servers:)

Private servers – the work still goes on. Solid foundations are already there, we need a couple more weeks to let players establish their own ones! It was a pleasure to meet you guys in our little box on PGA – Poznan Game Arena in Poland! We’ve gathered a lot of good feedback, constructive criticism and encouraged many new players to try OoR out.
Here’s the first video of Purpose who we met in Poznan: Thanks to our players we’ve put first translations into the game. Right now you can find other languages in general options and choose which one you prefer. If you would like to help us in translations or you just saw something completely out of context please join our team and make Out of Reach better:
http://crowdin.com/project/out-of-reach